Common Causes of Drain Blockages & How to Prevent Them

Common Causes of Drain Blockages & How to Prevent Them

“The main drain is blocked”

Did that send a shiver up your spine? Well, that is the effect that blocked drains have on most homeowners. There is no indirect way to say this but blocked drains are horrid. How else is one supposed to react at the sight of sewage in the toilet or any other place in the house? The bacteria and odour contribute to a situation that is not only disgusting but also harmful for the health of every person in the household. There is also the fact that clogged drains cause inconvenience while also blowing a big hole in your wallet.

Why do drains block?

Drain blockages are notorious in that they have several different causes. From accidentally-dropped foreign objects to the heavy accumulation of hair, kitchen grease and other gunk, the reasons for a drain (or several drains) getting blocked are multi-fold. You can clear and prevent a blockage only when you understand what causes it in the first place.

In keeping with that, here we discuss some common causes of blocked drains and how to deal with them. After all, there comes a point when resorting to a drain cleaner just doesn’t cut it anymore.

In case of a drain blockage outside your house, natural debris is the main culprit. Trees, leaves and shrubs are the most common causes for drains getting blocked, especially after autumn and spring. That is why it is important to regularly maintain your garden. Apart from enhancing the looks of your outdoor area, it also keeps outside water pipes and drains from clogging. However, leaves and other debris are not the only causes. If you have reasonably large trees in your garden, their roots are known to grow extensively in the quest for water. Drains, consequently, are their first targets.

The surest way to prevent drain clogs because of leaves and plants is to remove them from your outdoor area. While a few days’ worth of debris is harmless, your drains can become heavily blocked if you leave the debris unattended for too long. Also, make it a point to water your trees adequately so that their roots do not go poking around your drains for water. Finally, and if regular cleaning of your garden area is not possible for whatever reason, avoid plants that are known blocked drain causes. These include evergreen fig, camphor laurels, evergreen alder, weeping willow, poplar tree, liquidambar, palms, eucalyptus, silky oak and gingko biloba, among others.

Every one of you reading this must have encountered a drain clog that was the result of excessive hair build-up. Thankfully, most clogs due to hair can be easily cleared by removing the hair itself. But if you fail to remove the hair immediately, it can create several issues later. Hair falling into the shower, sink and bathroom is among the most common causes of drain blockages. 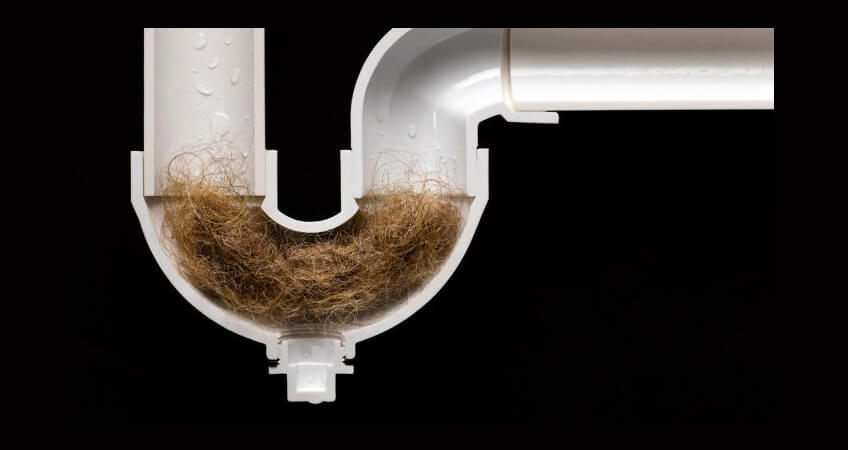 How to prevent drain blockage due to hair? Start by removing small bits of hair using your hand. You can use a pair of gloves while doing so or even buy a device that can be used to grab and remove the hair from the drain. Regardless of what you choose, it is important to remove the hair before it blocks the opening of your drain pipes.

Similar to hair in your bathroom, fat and grease also collect gradually in your kitchen sink. Which is why when it comes to common causes of household drain blockages, these slimy substances rank at the very top. What makes things worse is that it is very difficult to remove grease and fat from drains and pipes. For instance, you might wash them down the kitchen sink’s drain and think your job is done. But instead of flushing away, these fatty substances get stuck to the pipes’ inner walls. As the grease and fat keep building up, there comes a stage where the block is so severe that it doesn’t even let any liquid to pass through. Kitchen grease, as such, is extremely difficult to get rid of from your drain pipes.

What to do if your drains are blocked because of kitchen grease and fat? Using baking soda along with vinegar is a well-known and proven clogged drain home remedy. Another option is to pour boiling hot water down the sink. However, the ideal solution is to keep the grease and fat from entering your home’s drainage system. Even with regular cleaning using the above methods, it is likely that grease will cool down and harden if you keep discarding it into the kitchen sink. That’s why it’s safer to bag the fatty substances in a container and discard them with your regular trash.

It is astounding as to how often the main drain keeps clogging in many homes because of toiletries. The practice of discarding toiletries into the drain is an epidemic whose repercussions are felt by the larger network of sewers and pipes. That’s because when these items enter the drainage system, they soak up the water and enlarge. Sooner than later, this causes a block in the drain. 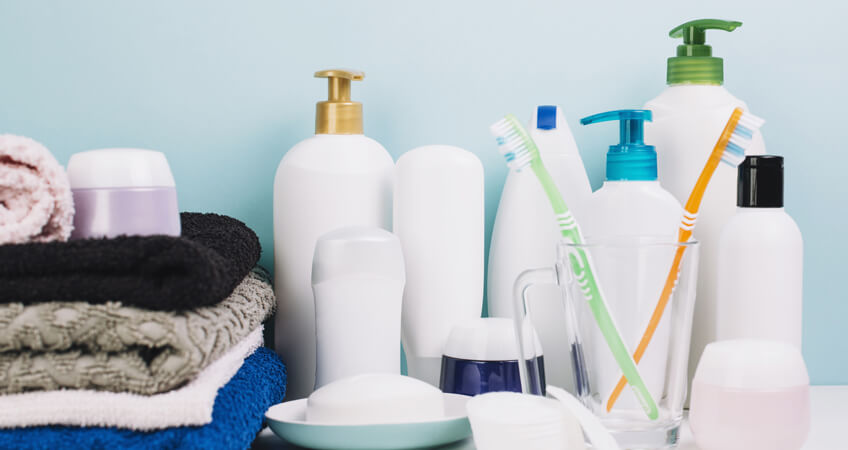 The only way to prevent that is to ensure toiletries go into the garbage bin and not the drain. Many of the emergency calls we’ve received over the years for plumbing blockage problems could have been avoided if people disposed of toiletries in the right manner.

A couple of heavy downpours is enough to fill your drains with lots of water. Most household drains are not built to handle multiple heavy showers, which means your drain can be full of water rather quickly. All is well until the time the water drains out. If it doesn’t, it means there is a block somewhere in the drain.

The best way to avoid a blocked drain outside the house is to make sure all gutters are cleared of debris like leaves and other garbage. Ideally, you should get a professional plumber to clean the gutters before the onset of the wet season. That’s because paying for preventive maintenance is far cheaper than unclogging your outside drain.

While not exactly among the signs of blocked drains, a slowed water flow is a definite sign of something being amiss with your plumbing system. If the water flow is occasionally erratic, it can be attributed to low water pressure. But if it’s a more frequent occurrence, it indicates sediment build-up. Sediments are nothing but minerals in the water depositing on the inner walls of pipes. After a period, these sediments tend to reduce the flow of water or even clog the pipes completely.

To prevent sediments from affecting the water pressure, detach removable parts like shower heads and clean them thoroughly. Most sedimentations can be cleared by soaking the affected part in vinegar. If that doesn’t work, the problem might require professional attention.

Among the less common causes of blocked outside drains is a broken pipe. The drain pipes outside your home can break for any number of reasons; it can be because of regular wear and tear or even adventurous tree roots. That said, a pipe with even the slightest of fractures is more vulnerable to clogging than a pipe with an intact structure. Broken pipes are also among the hardest to detect as they need to be visually examined.

This is where a professional plumbing service steps in. Call them if you suspect a fracture in any of your pipes. There are also broken pipe symptoms you can keep an eye out for; like leaks and water stains on the walls.

If your drain is suddenly clogged, it could be because of an external object. These objects can range from soap to children’s toys, food items, sanitary products and other types of foreign objects. Foreign objects that are small enough to be dropped into the drain eventually lead to a block. That’s why it’s important that these materials are not flushed or washed down the drain, even if only by accident.

You can prevent such a blockage by educating your children on what can and cannot be flushed down the drain. Also, ensure all food waste and scraps are disposed of with your garbage instead of simply washing them down into the drain. If any foreign object does accidentally fall into the drain, do not flush or ignore it.

In the years we’ve been fixing issues related to clogged drains, these have been the most common causes of clogged drains. However, this list is by no means extensive and there could be other less common clogged drain causes. In the end, the key to preventing drain blockages lies in the little things like installing steel mesh drain cups, using a DIY snake drain to nip any blockages in the bud and steering clear of habits that cause blocked drains.

That said, if you are facing drainage troubles like water coming up through the drain, shower drain keeps clogging, toilet drain keeps blocking or the tub drain keeps getting clogged, do get in touch with us. It could be a sign of something serious and if not fixed in time, can cost you a lot of time and money.