Types of Pipes for Plumbing and Water Supply

Types of Pipes for Plumbing and Water Supply

Water is life. This statement is unarguably true in more ways than one. Hence, plumbing is as essential as any other building process there is. Pause a minute and imagine how miserable life would be without pipes in our homes. How would toilets be flushed? How would we make foods with ease? How stressful would watering the garden or doing the dishes be?

The purpose of this article, however, is not to stress the importance of plumbing in your home, or city. It is, however, to emphasize the fact that plumbing is only as good as the pipes used. Without further ado, let’s get talking about the types of pipes that are used in plumbing and water supply.

These pipes are widely known for their high resistance to corrosion and consequent longevity. They are so durable, some of them last for as long as a century. For this reason, cast iron pipes are generally used for city water distribution systems.

Cast iron is made from pig iron – the rawest, and most impure form of metal there is. Because of its impurities, however, pig iron is weak and difficult to mould into other shapes. The process of manufacture into cast iron, thus, involves reheating in a furnace and pouring into moulds to achieve desired shapes.

Cast iron pipes are particularly resistant to corrosion because they are coated in bitumen for protection. This also improves its hydraulic qualities.

The usual length of the pipe is 12ft. Lengths of up to 20ft can, however, be obtained. Cast iron pipes usually have heavy thickness, to withstand pressures of up to 350psi. It should be noted that despite the pipe’s resilience, this value reduces over the years the pipe spends functioning.

These pipes can be joined in one of three ways. These include Bell and Spigot joints, hanged joints, or expansion joints. Of these three, the bell and spigot joints are the most common. They require skilled labour since molten lead is needed to fill the space between the bell and the spigot. They have been mostly replaced by flanges which are usually just welded or screwed. These flanges provide easier access for cleaning and inspection and are used when it may be necessary to disjoint the pipe. The flanged joints are used with gaskets if they must be watertight. 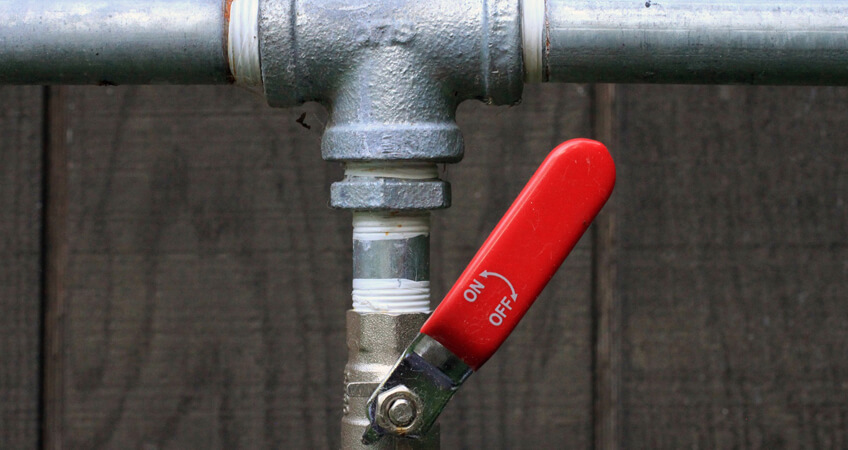 Unlike cast-iron pipes, these are made of mild steel sheets. They are generally used to supply water, gas, or any other liquid inside a building. They are called galvanized pipes because they are dipped in a zinc solution after. This action shields the pipe from rust. They are not, however, as corrosion-resistant as cast iron pipes, given that they only last for ten years.

They are more flexible in use and can be cut and joined quickly. They are joined with sockets. They are lightweight and very cheap. They are, however, negatively affected by acidic and alkaline waters.

Like GI pipes, they carry liquid in buildings. The only difference, however, is that wrought iron pipes are formed from a welded wrought iron sheet. Wrought iron is an iron alloy with shallow carbon content. These pipes are thus corrosion-resistant, malleable, and can be easily welded.

These pipes are even more lightweight than their galvanized counterparts and are hence, more flexible. They are made from 12mm to 15cm in diameter. 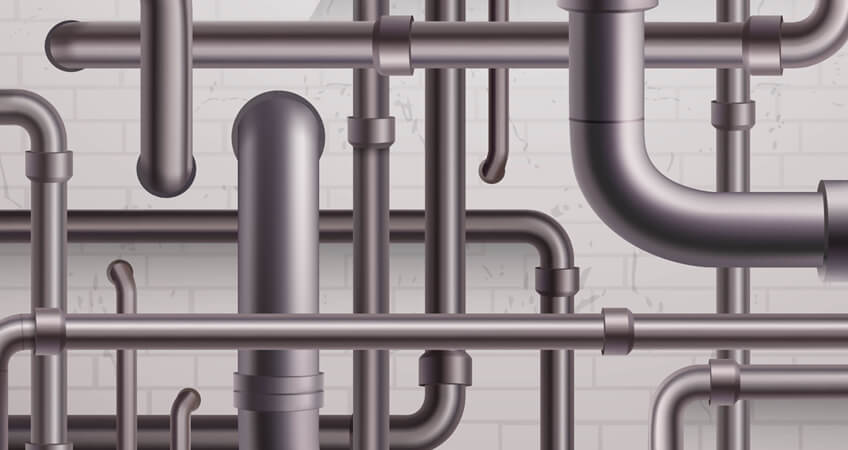 These pipes are made from steel sheets. They could be either small or large. They both have riveted and welded joints. These, however, are not visible in the small pipes. Like the galvanized pipes, the steel pipes are also dipped in zinc solutions. This method of resistance against rusting fortifies the pipes to remain durable for 25 to 50 years. They are incredibly lightweight, and hence, are not suitable for high pressures. They are so thin-walled that external forces can easily bend them. 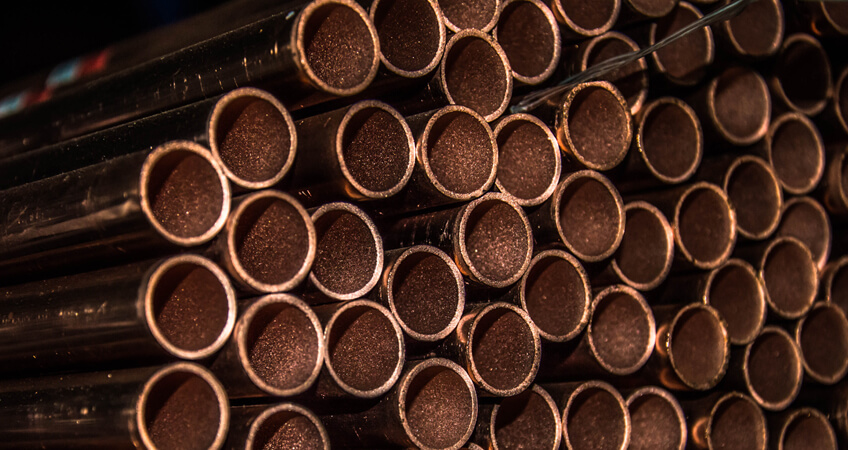 Copper is known to be an excellent conductor of heat and electricity. To this end, copper pipes are used to carry hot water or steam. They are so suitable; they do not bend or even get slack at high temperatures. Another characteristic of copper is its ductility and malleability. It is a mild metal, and hence, can be easily bent. This could come off as either an advantage or a disadvantage depending on the application. 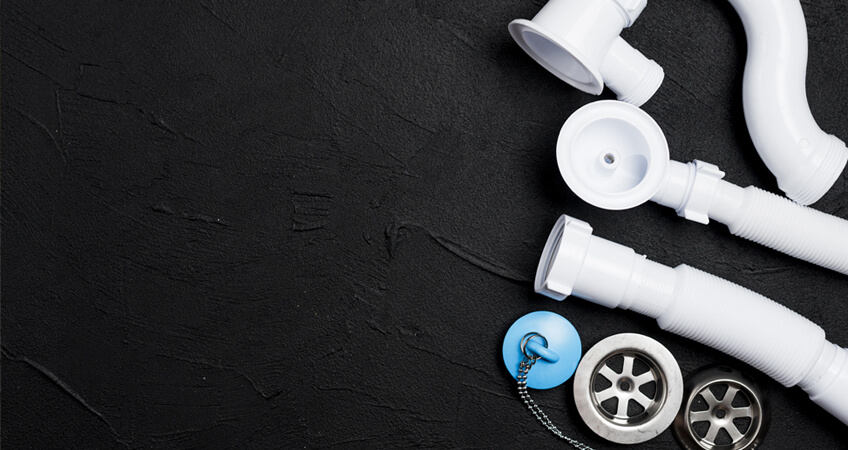 These are one of the most common pipes around. They are mostly used for domestic purposes. They include rubber and PVC pipes. Since they are non-metallic, they can be used for the supply of both acidic and alkaline water. They, however, should not be used for channelling hot water. It is plastic, after all.

They are usually joined using thread joints or sockets used with glues. A significant advantage plastic pipes have over all other pipe types is their inherent rust resistance. They do not function well in increased temperatures.

Cement and asbestos are not only used as building materials, in the most real sense. They are also used to make pipes. They are available in diameters ranging from 4 to 36 inches, and 13-ft lengths. Like the cast iron pipes, they can withstand high pressures, reaching up to 200 psi.

Contrary to impulsive assumptions, these pipes are lightweight, and unbelievably flexible, permitting deflection as much as 12°. While they are resistant to corrosion, they are brittle and are thus easily damaged by excavating tools 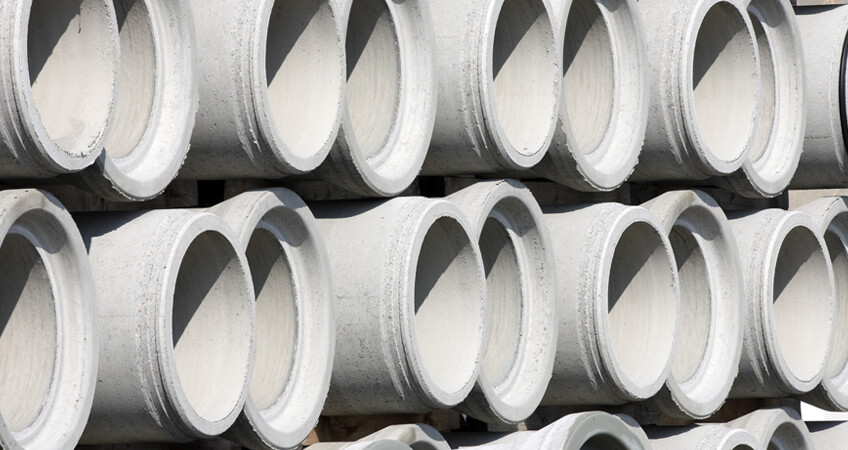 Concrete pipes are an upgrade of the asbestos cement pipes. These pipes could either be plain or reinforced. The plain pipes are made for low pressures and can bear water-head of up to 15 metres. The reinforced pipes, however, are made for more. They are prepared for high pressures and can carry water-head up to a whopping 75 metres. In essence, they can withstand very high pressures.

They are unaffected by rust, and can thus, last for at least 35 to 50 years. They are used in both low and high pressures. It is important to note, however, that concrete pipes that carry sewage water are prone to what is known as sulfide corrosion. This is a bacterially mediated process of forming hydrogen sulfide gas and its subsequent conversion to sulfuric acid.

While less expenditure is required for maintenance, production and transport could be quite costly, owing to the weight of these pipes. 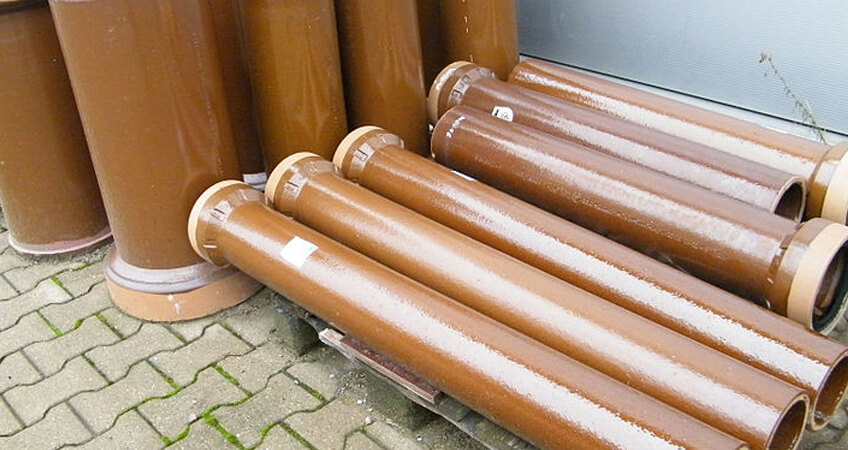 Like the majority of the pipes listed above, clay pipes are not susceptible to rust. They are thus, easily maintained and last very long. Because of smooth finishing in the kiln, these pipes possess smooth surfaces that provide high hydraulic efficiencies.

It is peculiarly difficult to secure watertight joints in these pipes, hence its redundancy in use under pressure. Nonetheless, fittings like the bell and spigot, and rubber-sleeve couplings are used to connect these pipes.

While there could be unsuitable pipes relative to the use you desire, there is no one best pipe by itself. Ensure that you consult for professional advice from plumbers, before deciding on what type of pipe to purchase.